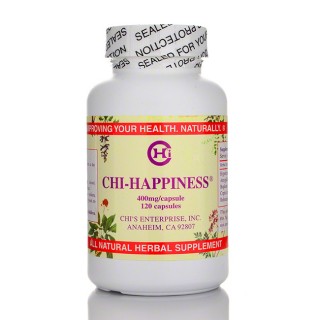 Chi Happiness is herbal formula that supports the overall well-being. Chi Happiness helps you get over the occasional blues. Its main ingredient is hypericum (St. John’s Wort), which has been used for centuries in Traditional Chinese Medicine.

Results of a recent study published in the British Medical Journal, revealed that St. John’s Wort (Hypericum perforatum) is almost as effective as paroxetine, a popular antidepressant drug. The study involved 251 patients who were given varying doses of both the drug and St. John's Wort for 6 weeks. At the end of the study, the hypericum group experienced a 56.6% drop in their Hamilton score, a means of assessing depression scale. The paroxetine group, however, experienced only a 44.8% decrease. Significantly, there were fewer adverse effects reported among those taking hypericum than those in the paroxetine group.